Together we are changing the face and practice of lawyering. For over a decade, the RJFP has fueled a growing and powerful group of new legal advocates who are part of a one-of-a-kind legal Fellowship for law school graduates who want to change the face and practice of RJ lawyering. To date, the RJFP has launched the careers of 80 lawyers who have a passion for reproductive rights and justice, placing them at both local and national nonprofits from coast to coast.

This policy-focused fellowship is designed to create entry points into the reproductive health, rights, and justice fields and to enhance legal and advocacy capacity at organizations working to advance reproductive justice for all people. RJ Fellows gain hands-on policy advocacy experience and work on cutting edge reproductive health, rights, justice issues, particularly as they affect people of color and other marginalized communities. Placement organizations benefit because Fellows bring legal knowhow and an intersectional approach to legal and policy advocacy.

RJ Fellows are paid a stipend and placed with organizations across the country for a year-long program that includes mentoring, professional development, skills-based training, and networking opportunities. Since its inception in 2010, the RJFP has launched the careers of dozens of new lawyers at a score of allied organizations and has expanded to include the Federal, State, and HIV fellowships.

We’re proud to partner with the American University Washington College of Law’s Women and the Law Program, the academic home of the RJFP. Since college, Amanda Le (University of California, Irvine School of Law’ 22) has been involved in the reproductive freedom movement and has worked professionally and personally on reproductive justice issues both on a local and statewide level. As a law student, Amanda was one of three Public Service Scholars in her graduating class contributing over 300 hours of pro bono work during her law school career. She also served as a student leader for Orange County’s Clean Slate Expungement Clinic and UCI Law’s Asian Pacific American Law Students Association. Prior to law school, Amanda worked for four years as a policy associate at the American Civil Liberties Union of San Diego and Imperial Counties (ACLU-SDIC), where she advocated for policy change relating to civil rights and civil liberties. She has served as the chair of the board of directors for the San Diego Coalition for Reproductive Justice and was an active member of her law school’s If/When/How chapter.

Amanda is a graduate of the University of California, San Diego. She was proudly raised in Visalia, California, within the Central Valley. Ariana Camara (Chapman University Dale E. Fowler School of Law’ 22) has been working in the non-profit sector since 2014. Prior to law school, she worked as the Office Coordinator for Jane’s Due Process and has continued volunteering on their support hotline since 2019. During law school, Ariana served as a student attorney in the Alona Cortese Elder Law Clinic, where she assisted low-income seniors in navigating social benefit programs, particularly for healthcare, and seeking legal recourse in situations of elder abuse. As an intern with Break the Cycle in 2020, Ariana also supported teens experiencing dating violence. Most recently, she has worked with NARAL Pro-Choice America as a legal fellow, advocating at the federal level for reproductive justice policies, including Title X funding, paid family leave, and the expansion of abortion rights and access.

Ariana graduated from the University of Texas at Austin with a Bachelor of Science in Political Communication. Chelsea Gonzalez graduated from the University at Buffalo with a joint JD/MSW in 2020. She is a Bronx native who first began tackling reproductive justice issues while in high school as a TORCH peer leader, facilitating inclusive and medically accurate sexual health workshops to youth throughout NYC. In 2016 she returned to TORCH to train and empower the peer leaders participating in the program throughout the summer.

During law school, Chelsea served as a 2017 Buffalo Human Rights Fellow with a position at the ACLU of Puerto Rico, where she primarily worked on their prison project advocating for the rights of those incarcerated on the island. She further interned at a variety of local legal and community based organizations such as: Legal Assistance of Western New York, VOICE Buffalo, and Partnership for the Public Good. Additionally, Chelsea remained active on campus, serving as an Associate and Submissions Editor for the Buffalo Human Rights Law Review, as Co-President of OUTLaw, and as a competitor and coach for the UB Thurgood Marshall Moot Court team. She was also a founding member and Co-President of the Intersectional Activism Alliance and supported underrepresented youth pursuing STEM (science, technology, engineering, math), allied health, and licensed professions as a Graduate Assistant for UB CSTEP (Collegiate Science and Technology Entry Program). Most recently, Chelsea worked as the Western New York Regional Organizer for the National Institute for Reproductive Health, where she utilized digital organizing tools to help advance abortion access for those with the ability to become pregnant and garner support for comprehensive sexuality education within New York State.

Chelsea attended John Jay College of Criminal Justice, CUNY as an undergraduate, majoring in Humanities and Justice with a Latin American/Latinx Studies minor in Honors. She was a Ronald H. Brown Law School Prep Program Scholar, as well as a CUNY BMI Stellar Scholar.

Chelsea will spend her second RJ Fellowship year at Advocates for Youth in Washington, D.C. Elias Fox Schmidt (University at Buffalo School of Law ’22 JD/MSW) is dedicated to bridging the gap between reproductive justice and trans liberation. He is passionate about reproductive justice, trans liberation, anti-racism, anti-imperialism, and trauma-informed lawyering. Elias is a descendant of the Seneca Nation of Indians and prioritizes anti-colonialism and Indigenous sovereignty in all of his work.

During law school, Elias served as a student attorney at the University at Buffalo Civil Rights & Transparency Clinic, working on issues related to fair housing, employment discrimination, government transparency, and police accountability. Additionally, Elias was an Initiative for a Representative First Amendment Fellow with a position at the Harvard Cyberlaw Clinic, where he worked on various tech law issues, including issues relating to video game accessibility, SESTA/FOSTA, and safety for trans people online. Elias also interned at Neighborhood Legal Services, Inc., where he assisted in legal name changes for trans people in Erie and Niagara counties in New York. Elias was very active on campus, serving as the first openly trans President of OUTLaw and the founder and Co-President of his law school’s Native American Law Students Association chapter. Prior to law school, Elias attended Buffalo State College, where he majored in English and minored in Psychology. In his free time, Elias enjoys beading, spending time with his family, and researching transmasculine history. Meera Rajput graduated from the University of Pittsburgh, summa cum laude, with a B.S. in Psychology in 2018. During her junior year summer, she interned at the Women’s Law Project, a nonprofit organization working to defend and advance the rights of women, girls, and LGBTQ+ people in Pennsylvania and beyond. This is where her dedication and passion for becoming a reproductive justice advocate blossomed. After graduation, she completed a year-long service-leadership program called Pittsburgh Urban Leadership Service Experience (PULSE). During this year, she served at the Pennsylvania Innocence Project, a nonprofit dedicated to exonerating those convicted of serious crimes they did not commit.

After her service year, Meera attended the University of Pittsburgh School of Law. During law school, Meera engaged in several activities. She served as a Pitt Law Student Ambassador, a 1L representative, and Secretary and social media Director of Pitt Legal Income Share Foundation (PLISF), a nonprofit dedicated to advancing law students’ careers in public interest. She also served as the Social Media Director of the Prisoner Legal Support Project (PLSP) and was a Legal Analysis and Writing Teaching Assistant. She interned both at the Women’s Law Project, where she prepared advocacy presentations and research on the new Title IX regulations in 2020, and the Education Law Center, where she helped research and write recommendations for school expulsion and SLIFE students.

Most recently, Meera interned at the National Women’s Law Center in D.C., where she worked on reproductive health and rights issues in colleges and universities, and SCOTUS abortion tracking. She also interned at the University of Pittsburgh Medical Center’s (UPMC’s) corporate legal department, where she updated guidance for COVID-19 vaccine mandates and worked on statutory interpretation issues. She was also a Truxall Scholarship Recipient and Dean’s Scholarship Recipient for all three years of law school and was awarded the Health Law Certificate and Pro Bono Service Recognition. Nina Haug (NYU School of Law ’22) has spent most of her adult life existing in and cultivating strong communities. In law school, she has been a Women’s Leadership Fellow with the Birnbaum Women’s Leadership Network, where she’s found one of her most meaningful support networks. She has been both a staff editor and a board member of the NYU Review of Law and Social Change as a Community Education and Accessibility Co-Chair. Nina has been a 2L and 3L Representative on the NYU Law Student Bar Association, where she has served as a Co-Chair of the Advocacy Committee both terms. Throughout her time in law school, Nina has worked to bring the voices of students, particularly those who are historically underrepresented in law schools, to law school administrators.

Nina has also been a student advocate in the NYU Law Reproductive Justice Clinic and the NYU Law LGBTQ Rights Externship, which have allowed her to do meaningful legal work on behalf of communities she belongs to outside of law school. Over the summers, Nina interned first with the Center for Economic and Social Rights as an International Law and Human Rights Fellow and then with the City Bar Justice Center’s Federal Pro Se Legal Assistance Project in the Eastern District of New York.

Prior to law school, Nina was a Eugene McDermott Scholar at the University of Texas at Dallas. She then studied history for several years at UC-Berkeley before leaving for law school. She is originally from south Louisiana and spent her 2L year zooming into law school from south Louisiana. She is looking forward to returning to the South to do reproductive justice work next year, and she hopes to continue to do this work in the South in the future. 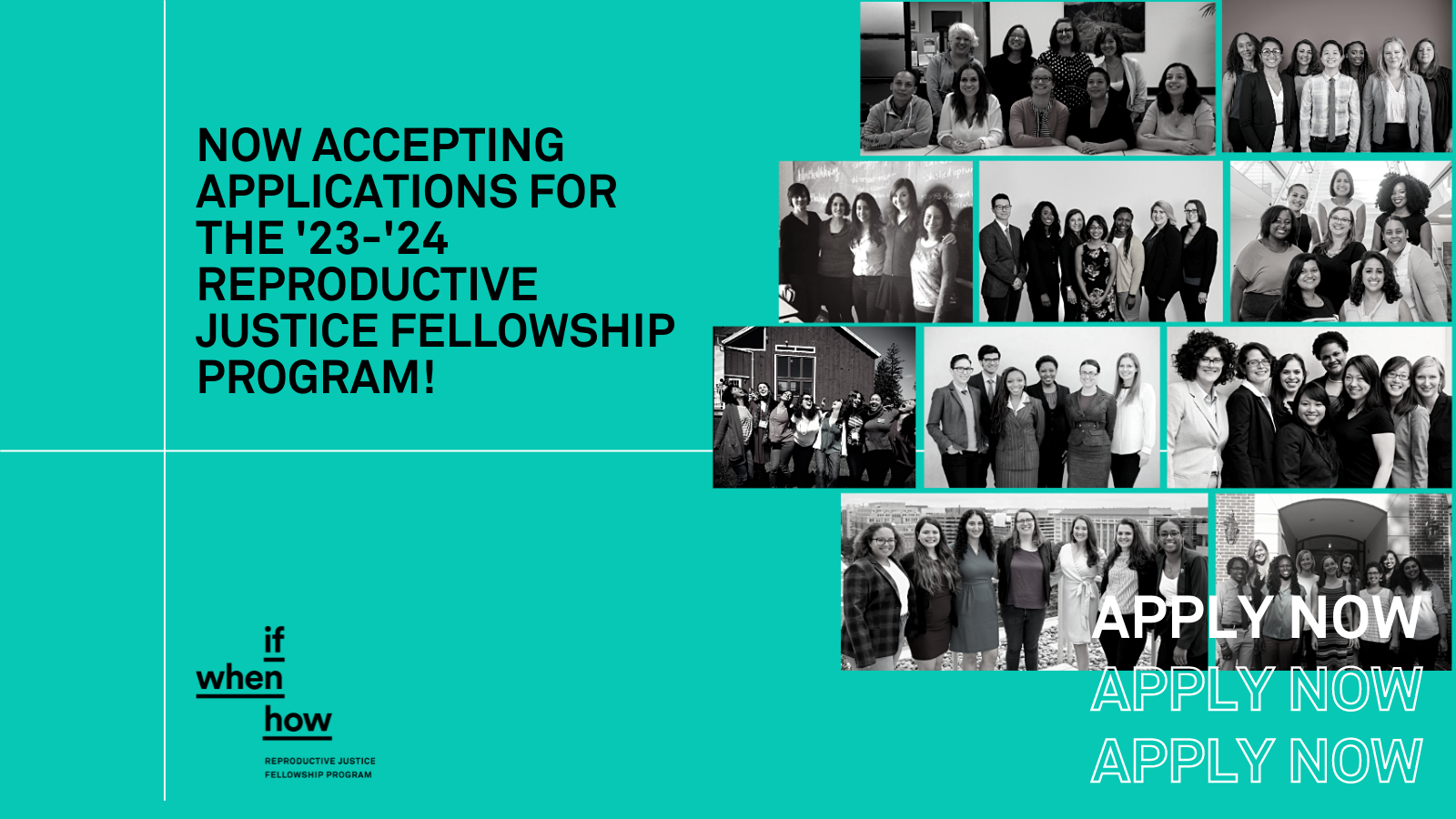 On the If/When/How blog