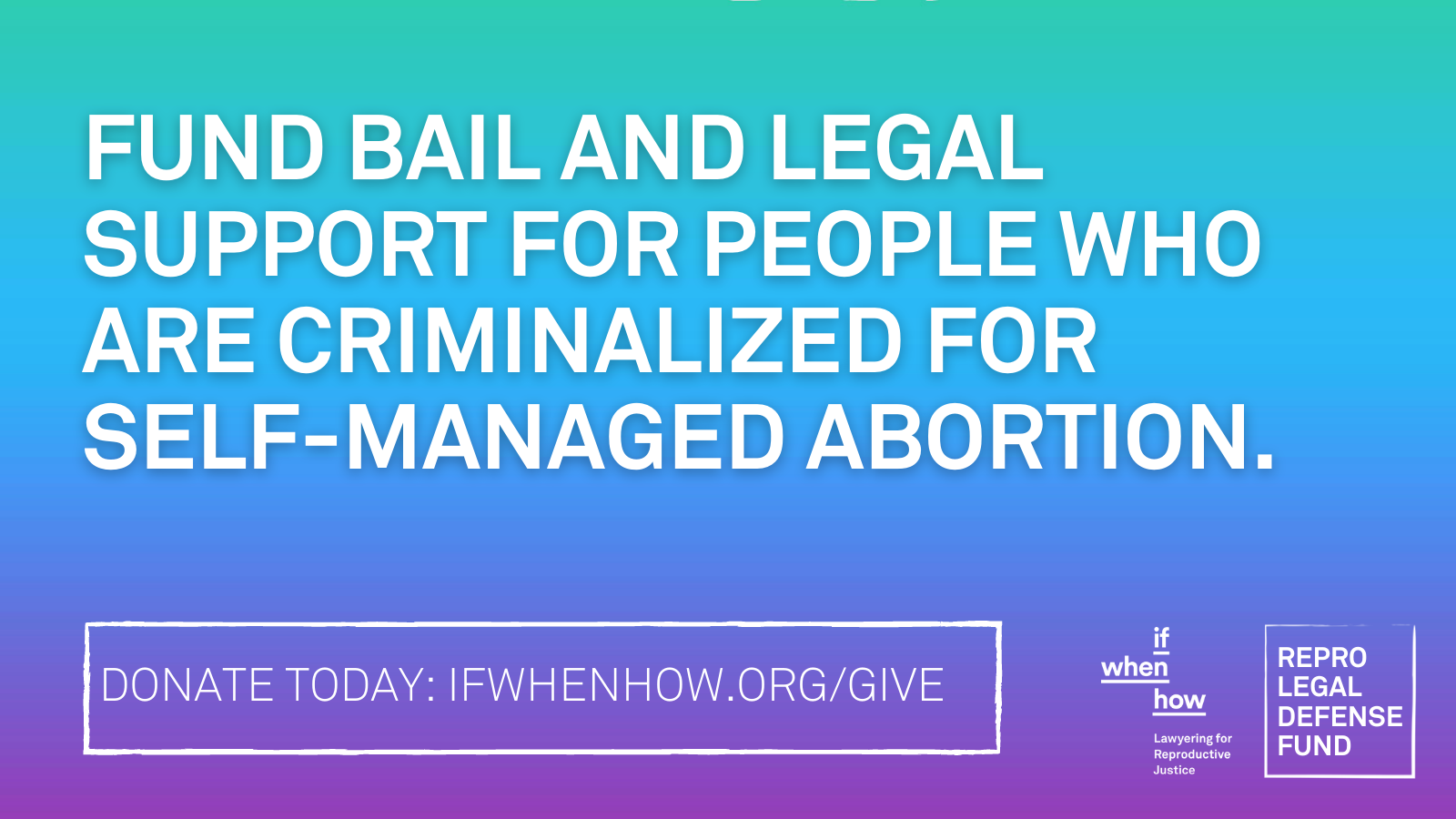 New Repro Legal Defense Fund to Cover Bail and Fund Legal Support for People Criminalized for Self-Managed Abortion, or Those Who Help Them

Today, If/When/How: Lawyering for Reproductive Justice is launching its nationwide Repro Legal Defense Fund (RLDF), a first-of-its-kind lifeline providing financial support to people who are investigated, arrested, or prosecuted for self-managed abortion, or for helping someone else end their own pregnancy.

“The Repro Legal Defense Fund is here to get people out of jail,” said Rafa Kidvai, J.D., If/When/How Legal Defense Fund Director. “By ensuring people can pay for a strong legal defense, we are closer to getting charges dropped and cases won. Whether someone self-manages an abortion because they were unable to access clinical care, or because it was the care that felt right for them, no one should be punished for ending their own pregnancy, or helping someone else do so.”

Everywhere in the United States, people have the constitutional right to abortion. Five states still retain laws that criminalize self-managed abortions, putting people at risk of prosecution – although these laws are unconstitutional. But even in states that have no such laws, politically-motivated police and prosecutors have tried to misuse other criminal laws to target people who self-manage abortion. If/When/How is aware of dozens of cases across the U.S. where people were arrested for self-managed abortion since 2000.

“Being criminalized is costly — emotionally, socially, and financially,” said Jill E. Adams, J.D., If/When/How Executive Director. “With attacks on clinical abortion access on the rise, and Roe v. Wade being directly challenged at the Supreme Court, anti-abortion lobbyists and politicians are finding new ways to ensnare people in the criminal punishment system if they self-manage abortion, or help someone else do so. We’re making sure anyone targeted in these attacks has the money to mount the strongest possible defense.”

Supporters can fight back with us by donating to the RLDF. If you can’t give, please help us spread the word by following and sharing our posts on Instagram, Facebook, and Twitter so that the people who need us know there’s a powerful team of legal experts and advocates committed to funding a strong criminal defense. We won’t let these attacks go unanswered.

People who self-manage abortion or help someone else do so, and are then investigated, arrested, or prosecuted for self-managing their care, can contact the RLDF via our secure online forms at ReproLegalDefenseFund.org.

The RLDF partners with If/When/How as part of a multifaceted strategy to prevent, defend against, and put a permanent stop to the criminalization of self-managed and supported non-clinical abortion. While the RLDF provides direct financial support, If/When/How’s Repro Legal Helpline provides legal advice, information, representation, and attorney referrals for anyone who fears criminalization for self-managing their abortion care, or assisting someone else. For more information on self-managed abortion and the law, visit ReproLegalHelpline.org.